All Collections
Advertiser FAQ
Why do clicks in Cointraffic differ from the sessions in Google Analytics?

Why do clicks in Cointraffic differ from the sessions in Google Analytics?

Written by Juri
Updated over a week ago

Clicks and sessions are metrics used in website analytics in order to help webmasters gauge the frequency and quality of traffic to their website. It is important to be able to distinguish the two as they have different meanings and not knowing the difference could lead to confusion in interpreting advertising campaign results.

The term “clicks”, as used by Cointraffic for the purposes of reporting, indicates how many times an advertisement was clicked by a user. The term “sessions” is used by Google Analytics to measure how many different sessions (defined by a single visitor visiting a website within a 30 minute time period) a website encounters.

In order to help distinguish the two metrics and where to locate each one, we have included a couple of screenshots for easy reference. Here is a Cointraffic report detailing the number of clicks an advertisement received over a one week period: 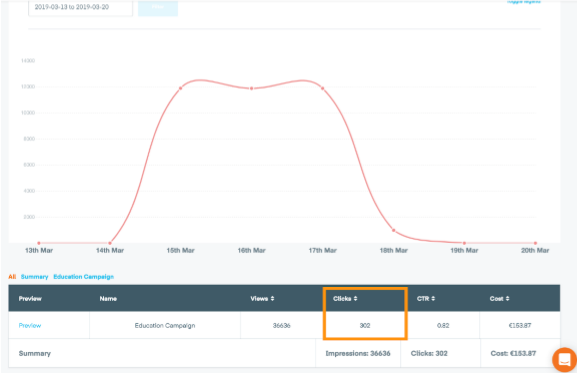 Here is a Google Analytics campaign report demonstrating where to find the total number of sessions over the same time period:

Notice how the two numbers yield different results. There are a few different reasons why clicks and sessions totals often do not match; we will review them below.

1. A single user might click on the same ad multiple times. Cointraffic records and counts each click separately while Google Analytics records separate page views by the same user all as a single session. Therefore, all clicks on an ad are counted individually, while all visits to a website by the same user in a period of 30 minutes counts as one session. This results in a greater amount of clicks than sessions.

2. In contrast, a user might click on an ad, resulting in the creation of a session. Later, the same user may return to the target website over half an hour later, resulting in the creation of a new session (for example, if they bookmark the website and revisit it at a later time). In this instance, a user will only generate a single click while generating multiple sessions, leading to a greater count of sessions than clicks.

3. Occasionally, landing page visitors will have JavaScript or images turned off in their browsers or will make use of other software, plugins or browser options that can prevent Analytics from recording data about their visit to the website. For example, they may have installed the “Google Analytics opt-out” add-on for Chrome. Analytics will therefore not be able to record the sessions of these users, but their clicks on the advertisement are still recorded by Cointraffic, which is yet another reason why click totals will not be the same as session totals.

4. Finally, a user might click on an advertisement but stop the page from fully loading by navigating to another page or pressing the browser's Stop button. If this happens, Google Analytics’ tracking code will be unable to execute, prohibiting tracking data to be returned to their servers. In this case, Cointraffic still records a click, but Analytics doesn’t record a session, thereby leading to a greater number of clicks than sessions.

How to Optimize Analysis of Cointraffic Clicks and Analytics Sessions

Below are some potential issues with a website and its advertisement landing page that may require prior resolution before a webmaster is able to accurately compare clicks and sessions. Cointraffic recommends performing the following checkups before getting started with an ad campaign:

Double check reporting periods.
Comparing two sets of data (such as Cointraffic and Analytics reports) is difficult, or even useless, when the time periods of the two reports are not properly aligned. It is important to note that Cointraffic servers use the GMT+2 time zone, which may be different from the time zone settings configured in Google Analytics. These settings can be customized, so it is important to align the Analytics time zone with that of Cointraffic’s. Otherwise, this difference needs to be taken into account manually when selecting matching periods.

Double check tracking configuration on the landing page.
If the landing page for an ad is not being properly tracked by Google Analytics, campaign-related visitor information cannot be recorded, and thus pertinent data about the effectiveness of an ad campaign will be lost. This problem can be avoided by performing your own test after loading tracking code into your landing page to ensure it registers on Analytics. However, on occasion, visitors may have set their browser preferences in a way that prevents Analytics from collecting data, which is an issue that unfortunately cannot be avoided.

Check for analytics code loading problems on the website.
Sometimes a deeper problem lies in the setup of the website or its connection to the internet which will prevent it from loading the tracking code. Occasionally, clicks reported by Cointraffic but not Analytics are due to an impediment between the click event and the website’s ability to load code on the landing page. This may be due to malfunctioning web hosting servers which can be determined by looking for users and IPs that register as clicks but not as sessions. In addition, some servers require customized analytics tracking code installations. For more information on this issue, refer to Google’s guide on how to make sure that Analytics code has been installed properly.

Check for server latency issues.
It is also possible that a slow server may cause the failure of a session to be generated by Analytics even when a click is recorded by Cointraffic. If a visitor arrives at a landing page but then doesn’t perform any further activity when on the website, a slow server could cause Analytics to fail to register a session.

Based on the discussion of the issues mentioned above, here is a quick list of things that should be done before attempting to compare Cointraffic clicks with Google Analytics sessions:

1. Make sure that Google Analytics has been installed correctly and is functioning as intended.

2. Make sure that the URL destinations in advertisements are correct and point to the landing page being monitored by Analytics.

3. Make sure that preset filters aren’t in conflict with the data being collected for the sake of analyzing an advertising campaign.

4. Make sure that Google Analytics has been configured to allow for manual UTM-rewriting.

5. When possible, avoid using URL-rewrites as it will throw off your ability to perform proper analysis of your landing page visitor statistics.

6. Make use of click tracking templates to be sure that clicks and visitor data is being recorded in an efficient, accurate manner.

By following the advice detailed above, the confusion between clicks and sessions counts can be drastically reduced, along with errors when interpreting reporting results from Cointraffic and Google. After all, a good advertising campaign requires good methods of analysis­ in order for any project to maximize the value of its results.

Did this answer your question?